I have traveled to over forty-eight countries and six continents. I love to devour nuggets of little-known facts and historical details. These tidbits become as rewarding as a treasure hunt. As a history teacher, I file these hidden gems away into my human hard drive.

There is one country that captures my heart and imagination over and over again – beautiful Italy! Whether I am wandering the narrow Medieval streets of Assisi, the romantic alleyways of Venice or the bustling boulevards of Rome, Italy never ceases to amaze me. Every time I visit, I discover something new.

Here are some fun facts about national artistic and architectural landmarks around Florence, Italy. They are guaranteed to deepen your appreciation when you visit.

Florence is an essential stop on any Italy itinerary. Take a few days to savor the artistic masterpieces of the birth-place of the Renaissance. Every turn peels back a layer of history waiting to be discovered. And you cannot escape the ever-present influence from the city’s most powerful Renaissance family, de’ Medici.

The de’ Medici family controlled, shaped, and monopolized all aspects of Florentine life: government, commerce, art, society, culture, and architecture. One of the family’s lasting legacies is a secret corridor that most travelers walk past unknowingly. Commissioned by Cosimo de Medici, in 1564, the Vasari Corridor (designed by Giorgio Vasari) connects the Palazzo Pitti to Palazzo Vecchio. This elevated corridor, which is nearly 1 kilometer in length, snakes its way unassumingly through the streets of Florence. Sadly, most visitors walk directly under the secret corridor never realizing the historical gem that looms above.

The de’ Medici’s used the secret corridor to walk to their offices, known in Italian as, the Uffizi’s. Every day they walked above the streets of Florence. Legend has it, they used the corridor to avoid curious onlookers, eavesdrop on local patrons, and even to avoid any enemies that posed a threat.

To accommodate the corridor, the beloved Ponte Vecchio bridge that crosses over the Arno River was forced to convert from a butchers’ bridge to a goldsmith’s lane. This eradicated any offensive odor that the Medici’s may encounter.

After centuries of use, the Vasari Corridor took on a new role in history. In 1938, Benito Mussolini was at the peak of his fascist rule. He desperately wanted to impress his formidable ally, Adolf Hitler. In preparation of Hitler’s visit to Florence, Mussolini commanded that a gallery of full-length windows be carved out into the west wall of the corridor. He wanted to make sure that Hitler would have the best view overlooking Florence. Even if it meant compromising the historical integrity of the original structure. Well, it worked.

Hitler was mesmerized by the beauty overlooking the city. When he knew he was destined to lose the war and the Ally forces were advancing toward Florence, he ordered that every bridge be bombed. But he chose to save Florence’s cherished gem, Ponte Vecchio.

The next time you find yourself in Florence, go beyond the typical attractions.  Let history be your tour guide. Also, make sure that you look up. You never know what sort of secret treasures may be lurking in the most unexpected locations. 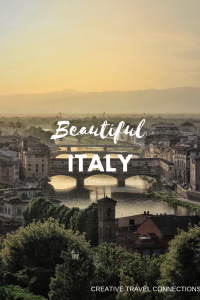 Get New Blog Posts Delivered to Your Inbox